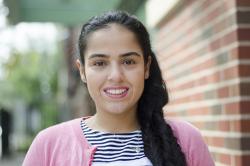 Noelia is a member of the Institute's Community Health Practicum Program. She works as a Diabetes Prevention & Education Coach.

I thought I knew…but had no idea

Noelia Melo helps out with Grow NYC’s “Fresh Food Box” outside of the Family Health Center of Harlem.

When I began my position as a Diabetes Prevention Coach at the Family Health Center of Harlem, I knew part of my job would be to facilitate shared medical groups. One of these groups was the National Diabetes Prevention Program (NDPP) which is a yearlong program that helps people form lifestyle changes that will prevent or reduce their risk of developing diabetes. Anyone could see the excitement across my face; I was completely ready to recruit participants and begin the program within the month. Even though I didn’t see a vast number of people who were interested or available to participate I tried to stay optimistic.

The month flew by and the start date for session one of NDPP had arrived. The previous day a total of eight patients confirmed their attendance for session one, so I felt confident that I would at least have eight people sitting in the conference room ready to make lifestyle changes to prevent diabetes. It was 11:00am on Thursday October 13th and only one patient had arrived for session one. About 15 minutes later another patient arrived to participate, and by the end of the session one the attendance totaled two people.

At first I started to question myself and my communication skills. Did I not communicate the details of this program efficiently enough? Is it my fault these patients won’t have a chance to make the changes necessary to prevent a disease plaguing our communities? Did they not like me as a person, which is why they didn’t come in at all? I took a step back from blaming myself and called everyone who had showed interest or agreed to participate. After listening closely I realized I missed something very important- the root of their absence. All of these patients had other, more important, events going on in their lives that prevented them from participating. I thought I knew about health disparities and the social determinants of health, when in reality I had no idea how each community faces different factors. Just because I had volunteered at a health center in Washington Heights, didn’t mean I understood the challenges facing the East Harlem community. I didn’t stop to think – “Are these patients ready to make a life changing commitment?” “Is there anything preventing them from participating in a yearlong program right now, even if they want to make the commitment?” “How is their mental health?”

I had one patient – who I will never forget – that was scared of developing diabetes but didn’t know how to prevent it on her own. Unfortunately, a life-changing event forced her to seek unemployment and housing help, which prevented her from participating in NDPP. After speaking to her I could hear the sadness in her voice when she stated she would not be able to attend. She felt she was being bounced around from place to place by the housing authority, without an end in sight. I felt horrible, but all I could do was remain available to her and see her for one-on-one health education sessions whenever she came into the health center. By collaborating with the dedicated providers and staff from the health center, we were able to provide a more personal and caring approach to manage the patient’s health.

Over time I became more aware of the different challenges our patients in East Harlem face and with the help of amazing staff members such as Guedy Arniella, Leticia Aliaga and Richie Reyes, I learned more than I thought possible. As health workers, we can’t only address health issues; sometimes it’s about where to find healthy food, addressing problems with transportation, lack of insurance, coverage for medicine or even other health concerns from depression to cancer. I learned to listen to the patient’s wants, as well as their needs and struggles.

As of today, I co-facilitate a new NDPP workshop, which started on December 8th. This workshop has a total of 11 active participants who have made this program their own. Even though many of them still face inequities in the health system, when they attend this workshop they know they have a “family” with whom they can share their experiences and work towards making healthier life-style changes.

Learn more about our diabetes care and groups; and take a look at these blog posts to meet a part of our diabetes team and some tips on how to prevent and manage diabetes.