Webinar Marks The Fifth Anniversary of #Not62 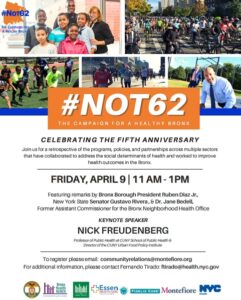 2020 would have marked the 5th anniversary of #Not62: The Campaign for a Healthy Bronx, but like everything else, COVID-19 shut down the plans to mark this milestone. This Spring we were finally able to mark this occasion with an exciting virtual gathering to celebrate this milestone. As we gathered, Bronx elected officials, community based organizations, residents, farmers, community organizers, food justice advocates, and health care organizations among others, we took a look back at what we had done over the past 5 years. When the first County Health Rankings Report was released on February 17, 2010, the Bronx was ranked as the unhealthiest county of the 62 counties in New York State. Shortly after, New York State Senator Gustavo Rivera and Bronx Borough President Ruben Diaz Jr. launched the Bronx Change Attitudes Now (CAN) Health Initiative. Other community based organizations came together to expand efforts to help the entire borough, and in 2015 the Bronx was awarded the Culture of Health prize from the Robert Wood Johnson Foundation (RWJF).

“Winning the Culture of Health prize was a big deal for us,” says Borough President Diaz Jr. “Since then we have been working and making progress, offering more Health Bucks at more farmers markets in the Bronx.” Oliva Little from RWJF shared, “The Bronx is one of the largest communities to receive the Prize. We were impressed with the New Settlement campus and how elected officials and community organizations worked together to create green spaces, access to the waterfront, and using data as a call to action.” Senator Gustavo Rivera and Dr. Jane Bedell spoke about their first meeting and how Senator Rivera was unable to find a healthy snack at a local bodega. “We should be angry that we are the unhealthiest county, and I would like the Bronx to be #1, not #62,” said Dr. Bedell.

Read the full article at our Bronx Health REACH blog.